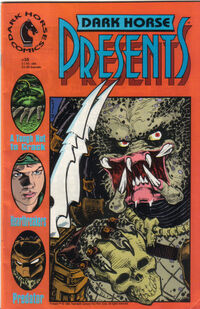 The Predator aliens are an extraterrestrial species featured in the Predator science-fiction franchise, characterized by their trophy hunting of other dangerous species for sport, including humans and Aliens. First introduced in 1987 as the Predator, the main antagonist of the film Predator, further members of the species were subsequently represented in a sequel, numerous novels, video games, comic books, and a crossovers with Aliens, Batman, Superman, The Darkness (Top Cow) .

The predators have gone to great length to keep the secrecy of their race from the universe, lest they should be discovered.

Predator culture revolves around the hunting and stalking of dangerous lifeforms. After making a kill, Predators typically skin or decapitate a carcass, converting it into a trophy. Failure in a hunt results in the Predator involved committing an honorable suicide. It is often alluded to that the reason Predators hunt is not for sustenance or elimination of threats, but as entertainment, as they will only attack life forms that have the ability to provide them with a challenge.

Predators made contact with early human civilizations such as the Ancient Egyptians, Cambodians, and Aztecs, as well as a fictitious culture inhabiting what is now modern day Bouvetøya. Upon arriving on Earth, the Predators were worshiped as gods by humans, and they taught many of the civilizations how to build pyramids (an explanation as to why many of these different ancient societies had distinctly similar cultures and architecture), but in return expected sacrifices of humans for use as hosts for hunt-able Aliens. The Predators returned to Bouvetøya every century to consummate the bargain, until at one point in the ritual, the Aliens spread out of control, resulting in the Predators destroying the entire area of the infestation. Relations with humans deteriorated, with the Predators from that time on viewing humans as little more than another quarry to hunt.

Predators feature prominently in the folklore of certain cultures, with some Latin American people referring to the species as, "El Diablo que hace trofeos de los hombres," meaning in Spanish, "The Demon who makes trophies of men." When hunting humans, Predators normally avoid certain individuals such as children and some adults if they are unarmed, though they will spare armed ones if they happen to be pregnant or sickly. A human who has managed to kill a Predator in single combat or has fought alongside one is usually given a gift (often a rare or exotic weapon) as a sign of respect. Predators have a deep respect for Aliens and consider them to be worthy as hunting trophies. Warrior Aliens are used to train and test young Predators by fatally weeding out the weaker initiates. A learner's first successful Alien hunt is completed with the marking of his forehead with the acidic blood of his kill. Predators apparently keep Alien Queens in captivity in order to obtain an easily accessible supply of eggs. It is shown in a brief scene in Aliens vs. Predator: Requiem that Predators have had prior contact with the Space Jockeys. This is confirmed in the film's DVD commentary.

The language of the Predators is expressed in the films and other media through written patterns of dashes. These written symbols appear on the creatures' gauntlet displays, their helmets, architecture, and many other surfaces. Predators will mimic human language on occasion. Author Steve Perry designed a specific language set for the Aliens vs. Predator novel series.

They are also skilled climbers, and will readily move through trees or across rooftops in pursuit of prey. Though capable of surviving exposed in Antarctic temperatures for an extended period of time, it is implied that Predators have a preference for hot equatorial climates. Their blood is dark phosphor green in color. Their vision operates mainly in the infrared portion of the electromagnetic spectrum; they can easily detect heat differentials in their surroundings but are unable to easily distinguish among objects of the same relative temperature. A Predator's hunting helmet increases its ability to see in a variety of spectra, ranging from the low infrared to the high ultraviolet, and also filters the ambient heat from the area, allowing them to see things with greater clarity and detail. They are capable of breathing Earth's atmosphere, though they show visible discomfort breathing air from heavily urbanized areas. Their dietary habits are mentioned in Predator 2, where it is revealed that the creature regularly visits a slaughter house every two days to feed on the stored meat there. High amount of natural painkillers (enough to be able to withstand amputation of a major limb).

Type of Government: Caste system
Level of Technology: Predator technology is distinctive in many respects, not the least of which is its ornate, tribal appearance masking deadly, sophisticated weaponry. It is shown in Predator 2 that at least one Predator weapon uses a metal that does not correspond to any element on the periodic table, and some weapons have been shown to be completely resistant to the effects of acidic blood belonging to Aliens. In addition, several of these tools make use of thermal imaging to track prey. The Predator's mask also houses a viewing system that allows the creature to see primarily in infrared. The Predator also makes use of a light-bending cloaking device.
Cultural Traits: The Yautja race are a hunter/warrior-based society. Predator culture revolves around the hunting and stalking of dangerous lifeforms. After making a kill, Predators typically skin or decapitate the carcass, converting it into a trophy. Failure in a hunt results in the Predator involved committing an honorable suicide. It is often alluded to that the reason Predators hunt is not for sustenance or elimination of threats, but as entertainment, as they will only attack life forms that have the ability to provide them with a challenge.
Representatives: No Known representatives.