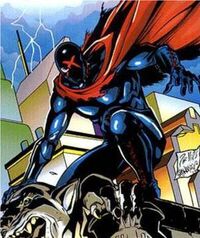 When he was a child, he and his father were in a terrible fire. He awoke from the fire horribly burned, but without any memory of what happened. Because of a scientific test performed on his father years ago, his blood had regenerative properties, and it healed all of the burns on his body in two weeks.

As a teenager he fell in love with his therapist, who was assigned to fix his violent tendencies. He was still violent, but when he took down a rival suitor, she became enthralled with him.

Career as a Vigilante

He is known for giving criminals second chances by marking them with a slash. If they commit crime again, he marks them with a second slash, making an "X", which means they get no more chances.

He eventually dies when his love rival, Carmine, a strong believer in astrology, ordered him killed because of the stars' premonition.

Retrieved from "https://darkhorse.fandom.com/wiki/X?oldid=19820"
Community content is available under CC-BY-SA unless otherwise noted.