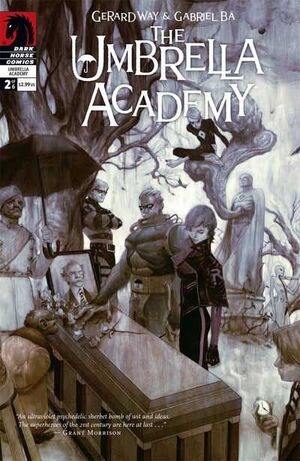 Appearing in "We Only See Each Other At Weddings And Funerals"

Synopsis for "We Only See Each Other At Weddings And Funerals"

Luther was woken up by Dr. Pogo and told that Allison had arrived. He went outside to meet her and they were joined by Klaus. Meanwhile, at a carnival in the city, seven robots known as the Terminauts attacked. Five returned to the Umbrella Academy after traveling through time. When five of them were gathered, along with Dr. Pogo and their mother, they buried Reginald Hargreeves. After Vanya's performance at the Icarus Theatre, she was approached by a man known as the Conductor, who asked her to play his piece, the Apocalypse Suite, which she refused. A fight broke out between Luther and Diego at the Umbrella Academy, but was broken up when Five informed them that the world was destroyed only three days after their father's death. Then, they were attracted by a fire at the carnival that they could see from a distance.