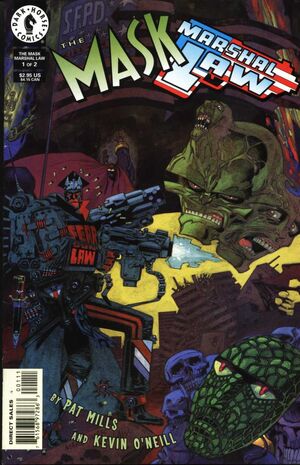 Appearing in the 1st Story

Synopsis for the 1st Story

After teaming up with Savage Dragon, Marshal Law decided that he no longer hated superheroes and wanted to turn in his resignation to Commissioner McGland. Ever since Suicida was thrown out of Gangreen, he had been taking on a gang called the California Bastards. He had chosen a replacement; a woman named Gale Force. Meanwhile, at S.H.O.C., Commissioner McGland was observing scientists. including Father Hood, experiment with The Mask on the Sleepman; the son of The Public Spirit. When coming into contact with The Mask, the Sleepman reacted violently and began to break free, only for himself to be beheaded by the scientists. At the Mission Hospital, Joe and Gale took Elemental Man out for some air, when he accidentally caused an earthquake and a tornado. Back at S.H.O.C., the head of the Sleepman was still alive, due to the mask. At night, Joe and Gale were having sex, when they were alerted by Danny's return. Joe decided to become Marshal Law once more.