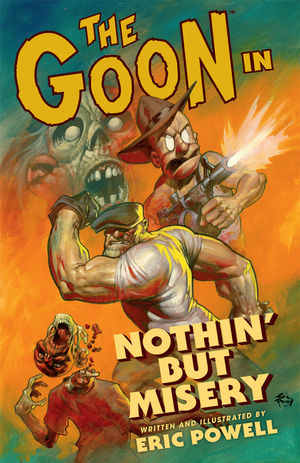 The Goon is a comic book series written and drawn by Eric Powell (with colors often by Dave Stewart or Eric/Robin Powell). The series mixes both a comical and violent atmosphere with a paranormal slant, with the average story concerning various undead creatures/zombies, ghosts, ghouls, mutants, skunk-apes with an unnatural hunger for pies, giant squids, mob/gang leaders, extra-dimensional aliens, mad scientists, robots, and more.

An orphan raised by his Aunt Kizzie, a strong-woman for a carnival. When wanted gangster Labrazio made the carnival his hiding place, Goon snuck into his trailer after hearing about the man's reputation for viciousness. Labrazio showed the young Goon a book containing the names of his enemies, people who had done him favors, and people who owed him money. The police managed to track Labrazio down, however, and surrounded the trailer. In the resulting shoot-out, Goon's Aunt Kizzie, while trying to protect her nephew, was gunned down by stray bullets from Labrazio's firearm. When Labrazio dismissed Kizzie as a "stupid broad" for getting in the crossfire, the young Goon snapped and beat the mobster's skull in with a rock. Figuring the late gangster owed him something, Goon took Labrazio's book (and the man's hat) and took over the entire operation, collecting money and offing deadbeats, all the while insisting that Labrazio was still alive and the Goon was merely his "enforcer." The Goon is a hulking figure, normally wearing green pants, a white or black shirt, and the hat he removed from Labrazio. Occasionally he wears a faded blue shirt with green stripes on the sleeves—the uniform from his football days. The left side of his face is horribly scarred, caused in a fight with a Triad leader who could turn himself into a dragon by the use of dark magic (as explained in The Goon graphic novel Chinatown). His eyes are blue, with the scarring on the left side of his face rendering his left eye blind. He has brown hair cropped short, almost always covered by his trademark cap.

After killing Labrazio, the Goon met Franky, a cowardly kid who was continually picked on by bullies. They became fast friends after the Goon beat up a kid who tormented him. The Goon involved Franky in his criminal business, setting out to burn down a barbershop which refused to pay protection to "Labrazio". During the arson attempt, they were attacked by zombies. Franky, not believing he could, killed one in self-defense, at which time he underwent a change in personality, adopting a haughty "tough-guy" persona similar to the Goon's, and taking up the position of the Goon's right-hand man. Franky normally wears brown pants with suspenders, a white tank-top, and a brown fedora on his bald head. Franky's eyes are drawn without pupils, similar to the comic strip character Little Orphan Annie. Franky is nowhere near the Goon's level in combat prowess, but he has proven himself useful many times, if nothing else than to watch the Goon's back and act as another set of hands. His signature move is the "knife to the eye".

On October 12, 2012, Blur Studio and Fincher launched a 30-day Kickstarter, an on-line fundraising campaign, titled "The Goon" Movie... let's KICKSTART this sucker!!!," to raise $400,000 to finance a story reel for the entire film. The Kickstarter page also explained why they need the money: "The Goon Film has NEVER been in production. All the work you've seen (animation footage, trailers, artwork, etc.) has been produced independently and out-of-pocket by the creative team of David Fincher, Eric Powell, Blur Studio and Dark Horse Entertainment. We created "proof of concept" footage to show Hollywood the incredible potential of a Goon movie. It was very well received BUT because this movie isn't a sequel or filled with dancing animals we'll need more to bust open the gates and UNLEASH Goon and Franky on Hollywood."

Retrieved from "https://darkhorse.fandom.com/wiki/The_Goon?oldid=15331"
Community content is available under CC-BY-SA unless otherwise noted.