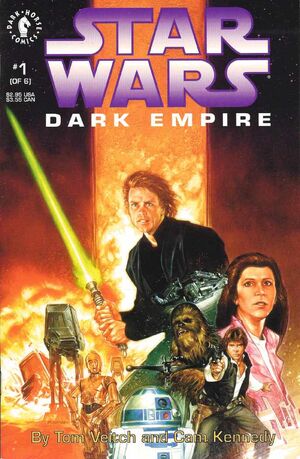 Appearing in "The Destiny of a Jedi; From A Time Of Peace…To A Time Of Darkness"

Synopsis for "The Destiny of a Jedi; From A Time Of Peace…To A Time Of Darkness"

Six years after Return of the Jedi, the Rebel Alliance has established a New Republic over three-fourths of the galaxy. The surviving Imperial Forces are torn by civil war and harassed by rebel attacks. One of these raids ends in disaster: Luke Skywalker and Lando Calrissian are shot down over the former Imperial City. When news reaches Han Solo and Leia Organa, they rush to the rescue...(along with Wookie Chewbacca and droid C3PO, of course!) But there's something else rushing toward the Imperial City...something that wants Luke.

Retrieved from "https://darkhorse.fandom.com/wiki/Star_Wars:_Dark_Empire_Vol_1_1?oldid=20120"
Community content is available under CC-BY-SA unless otherwise noted.