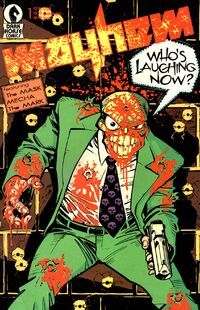 Stanley Ipkiss is alway in the beginning of the comic when he wears glasses and he did not have some of his hair.

Stanley Ipkiss was a regular guy, who had a rough life. Ipkiss found The Mask as a gift for his then girlfriend, Katherine. Stanley learned of The Mask's magical powers when he tried the thing and he became a powerful being with extraordinary abilities. Although he wanted to use these new powers for good, he also used them for his own personal gain.[1] His personal vendetta prevented him from pursuing nobler goals with his new powers and as a result, his relationship deteriorated to the point where Katherine broke up with him and his activities as The Mask caught the attention of the local authorities, including Lieutenant Kellaway.[2]

After their first encounter, Kellaway had his forces murder the Mask, but of course The Mask survived the attack and continued his criminal spree all over the city.[3] Despite Kellaway and the Police Department's best efforts, The Mask continued his murderous spree and after decimating a large faction of Kellaway's men. However, The Mask returns to Stanley's apartment, where he removes the Mask and starts packing in preparation to leave town. Distracted, Stanley doesn't notice that Katherine is inside and she steals the Mask, only to become the new Mask and Stan is soon killed by Kat, The Mask.[4]

The following powers are only granted while wearing The Mask: