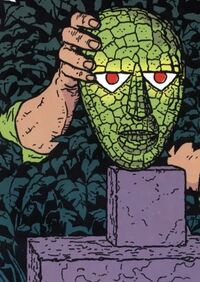 The Mask is an arcane, indestructible object in the shape of a mask, which imbues the wearer with extraordinary powers, but it also alters the person's physical appearance, often turning the person's head into a big, bald or semi-bald skull-shaped head of exaggerated proportions.

The mask was used as a sacred artfifact in strange shamanic rituals by jungle tribes in which the Shaman wearing the mask would be killed, except that the Mask prevented him from dying. Eventually, a mob boss called Razziky learned of the Mask and hired a man to steal it from the shaman, but when Razziky's men tried to double-cross the hired man, he used the Mask to his advantage and killed them all.[1] After these events, little is known about The Mask's history until it reappeared in a shop as an item for sale.

Stanley Ipkiss found and bought the Mask as a present for his girlfriend, Katherine, but eventually, he learned of the Mask's magical abilities when he put it on his face out of curiosity. With his newfound powers, Ipkiss made ill use of the Mask and caused serious trouble in town. Katherine eventually learned of Stanley's secret and after a rough break-up, she stole the Mask from Stan and murdered him.[2]

Katherine was Stanley Ipkiss's former girlfriend, who was also a keen art collector. Stanley bought a rare Mask in an antique shop for her, unaware of the Mask's powers. Soon Katherine learned of the atrocities committed by The Mask and she deduced that Stanley was using the Mask to commit all those crimes. With revenge in mind, Katherine stole the Mask from Stanley and used in on herself to become the new almighty Mask.[2]

A month later, Katherine regretted having taken the Mask and she dropped it at the Police Department with Lieutenant Kellaway, who had been closely involved with the Mask's head since the beginning. Kellaway's curiosity to wear the mask caused him to put it on and become the new Mask, unheeding Katherine's warning. As The Mask, Kellaway went on a murderous spree against criminals across the city.[3] Eventually, Kellaway realized the dangers of using the Mask and he buried the Mask on the basement of his home, covering it with quick drying cement.[4]

When Kellaway was attacked by gangsters, he tried to retrieve the mask from his basement, but failed and the Mask was taken by the criminals. The gang's driver, "Little Nunzio" put on the Mask and started using his new powers to become the ruler of the city's underworld.[5] The man succeeded in eliminating all competition from rival gangs, but his reign was short-lived as he was seduced and manipulated by Katherine into taking off the Mask. Unfortunately the plan didn't go well and Kathy was forced to kill Little Nunzio and wear the Mask to save herself from the rest of the gangsters.[6] Katherine used the Mask one last time to confront the brute Walter, but she eventually surrendered and dropped The Mask inside the burning warehouse where they were fighting. After the fight, Kathy left the Mask in the burning building; although if Walter had picked the Mask or it remained in the building remains unclear.[7]

Sometime later, a teen named Rick who had been a big fan of the Mask passed the now burnt building where Katherine had battled Walter and found the mask in the debris. He put it on, transforming into a punk mask version of himself and went home to show his friends Ben, Hugo and Archie.[8] However Rick soon realized that he couldn't think straight when wearing it especially when he threatened a small child who was asking for an autograph and crossed paths with Walter. He went home, removed the mask and decided to discard it as he felt wearing it was too much.[9]

Ben was one of Rick's friends who too was a fan of the Mask. He was a wannabe rock star who always was a tease and nicknamed his friends "Snacky". Ben obtained the mask after Rick discarded it and after putting it on, turned in a black haired, black suited crazy rock star masked version of himself and went on to pursue his dream of becoming famous. He got a job at a club and was about to play his music when he suddenly turned into a Barry Manilow version of himself instead of the rock he had been expected to play. He too crossed paths with Walter and escaped and hid in an alley. He removed the mask and decided never to wear it again as he felt that it only made nightmares come true.[10]

Hugo was another of Rick's friends who took the mask and put it on to escape after Rick, Ben and Archie were caught by Kellaway and taken away for questioning. Unlike the others, he didn't have a green face, but he discovered that he could mold his face into anything he wanted to be including his normal face. But he began to discover that the powers of the mask were making him see the world from a weird and scary prospective even his own family looked terrifying. Unable to take anymore, Hugo ran back to Rick's flat, removed the mask and begged the others to take it as he felt the mask was creeping him out.[11]

Archie was another of Rick's friends who enjoyed studying chrysalises and was keeping one that would awaken as a butterfly. He was given the mask by Hugo after he discarded it as he seemed as the only sane guy to have it. When the others asked what he would do, he put it on and decided to fight crime. However he got himself in trouble when he let the animals out of zoo and like the others had a fierce confrontation with Walter. Kellaway appeared and urged Archie to give him the mask before anymore damage was done. Archie understood like the others that he was unable to control the mask so he removed it and tried to give it to the cop, but Walter emerged from the river where he had fallen during the fight and seized the mask for himself. When it didn't work for him, he threw it hundreds of miles into the distance much to Kellaway's horror. What became of the mask is unknown.[12]

The Mask grants the wearer various powers and abilities, some of which are mentioned below.

Retrieved from "https://darkhorse.fandom.com/wiki/Mask?oldid=19723"
Community content is available under CC-BY-SA unless otherwise noted.