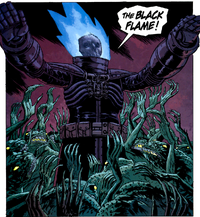 Landis Pope succeeded as CEO of the Zinco Corporation following the death of Roderick Zinco in Norway. Pope continued his predecessor's ambitions with Grigori Rasputin, but instead seeking to gain the powers of the Ogdru Hem. Pope tasked his R&D department with studying the frog monsters, to the extent that Pope is able to both speak to them and control them. For purposes of safety, Pope wore a suit of reinforced black armor when dealing with the frogs, but this costume serves a second purpose: it personifies him as the mysterious Black Flame. Presumably under the guidance of some ancient text, Pope and the frogs performed an occult ritual, sucking the life force out of one frogman and enveloping Pope's skull-like helmet in a torch of obsidian fire. Suited up and ensorcelled as the Black Flame, Pope hoped to harness the power of Katha-Hem for his own personal gain. Too late did he discovered that the destiny of the Black Flame is to simply "light the way" for Katha-Hem into our world, and that he was manipulated by the frogs into serving their purpose.

After the death of Katha-Hem, Pope was freed and encountered Liz Sherman, who was responsible for killing the Ogdru Hem. Pope begged Sherman for helping out of his suit, which entrapped his entire body, and apologized for being responsible for Roger's death. He was then forcefully dragged away by several frog monsters into a deep chasms where the remains of Katha-Hem fell.