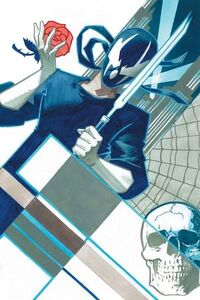 Originally known as Eddie, the man who became Grendel was a kid picked on by a lot of adults with his parents not even caring less about their son. Eddie showed unstable and psychopathic tendencies from an early age, threatening to set his oppressors on fire after dosing them with gas after tampering with the sprinkler system.

Later as he got into fencing, Eddie's abilities had gotten the notice of both his team and the world outside, even defeating much older and more experienced champions. However, finding no pleasure in his activities since it all came so easily, he threw a match in London. After the fight was over, Eddie encountered Jocasta Rose, a trainer who he was immediately smitten by despite the near twenty year age gap after she noticed and appreciated his real skills.

After Jocasta's death, Eddie took on the name Hunter Rose in memory of her and became a novelist. He also took the name Grendel after the monster from Beowulf, hunting down a mob hitman and taking his job.

Hunter's books became best sellers, gaining him fame and prestige among New York's wealthy elite. His activities as Grendel often had him go after targets of the Cioccine crime family, usually in the form of traitors or people with ties that should not be exposed. Grendel eventually disposed of the Cioccine crime family leaders, installing himself as boss. At some point he encountered the cursed wolf-man Argent and began a long battle with the creature.

When one of his lieutenants Barry Palumbo betrayed him and tried to have him and Argent killed, Grendel has poisoned his drink. Grendel later took his niece Stacy in as Hunter Rose with the publicity helping his next book. Argent also grew close to Stacy and with Hunter busy all of the time, he often left Stacy at home with hardly anyone to communicate with including a governess Stacy had later murdered but made look like an accident.

When Hunter was out, Stacy found out that Hunter was Grendel, and that he had manipulated the events that lead to her adoption. Stacy had contacted Argent for help by acting that she was held hostage by Grendel.

Grendel and Argent fought in one final battle where they were both wounded. Before succumbing to his wounds, Grendel told Argent how their battles were more of a way of playing off each other. Argent could no longer walk and Grendel later died from his wounds and unmasked.

Since childhood, Eddie was shown the dark side of humanity from bullies, indifference from his parents and teammates, and the crime lords that flourished. Eddie had only a distaste for the lack of thrills life had given him, all the while using whatever means of payback against people he deemed necessary including threatening his tormentors to be burned alive but not following through.

As a teenager, despite his great skills, Eddie found his abilities to be lacking in excitement or challenge with the praise and scorn he received being indifferent to him. Meeting Jocasta Rose however gave him a sense of love and passion that he returned to her until Jackie's death.

As Hunter Rose, his writing show a deep understanding of the human condition and how to bring out a person's feelings. The mask of Grendel however gave him a sense of control and thrills that he sought out for, killing targets like a game hunter and eventually going for greater gains by killing the rest of the mafia heads and assuming control.

Hunter however is a sociopath who lacks most humane emotions like guilt or empathy. His targets while not good people, are seen more as rats to him. When a worthy opponent like Argent appeared, Grendel decided to let him live so he can "play" with him more, to the point of shaming him.

The only thing he seems to even care about was Stacy, raising her like a loving father but always keeping her in the dark of his activities. Hunter also never looks into her own mental instability despite signs suggesting otherwise. Even then, his love for his adopted niece Stacy are more along the lines of an echo of his love Jocasta.

An autopsy on Hunter Rose revealed he may have had an advanced genetic mutation that allowed a much higher usage of mental capacities.

As a child, Eddie demonstrated advanced learning capabilities, able to master anything he tries. Beginning in his fencing days, he was very adept at using weapons. As the years went on, he became an Olympic level gymnast and acrobat able to effortlessly move through the city of New York with little effort. His coordination is so high, Grendel can move silently without anyone ever noticing. Grendel's reputation along with these skills gave Grendel the title of the Devil.

Grendel's regularly assassinates targets through surprise attacks, but is capable of killing twenty armed men without a scratch on him.

Hunter Rose has the strength and dexterity of a man who engages in regular intense training and exercise.

For all of his intelligence and resources, Hunter Rose is mentally unstable. He has a sociopathic disposition, looking down on many people especially the ones who were brought to desperation. He also takes some form of pleasure in toying with his enemies, leading to a long standing rivalry with Argent the Wolf and keeping him alive for the sake of thrills.

Folding Two-Pronged Spear with electrical blade disguised as a cane.