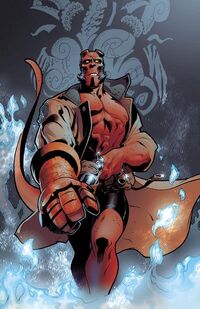 I'm fireproof, you're not.

Summoned by Nazi cultists lead by Grigori Rasputin, Anung un Rama was destined to destroy the world by unleashing the Ogdru Jahad to spread darkness and chaos across existence.

The demon was supposed to be summoned off the shore of Scotland by Rasputin's Project Ragna Rok, but instead appeared at a ruined church near East Bromwich, England where it was found with an extremely large rock arm by Allied troops, adopted by Trevor Bruttenholm, and named as Hellboy. Over the years, Hellboy was granted honorary human status by the United Nations, and then raised by the U.S. Government as the lead agent in the Bureau of Paranormal Research and Defense (BPRD), where he worked with Abe Sapien (an icthyo sapien), Liz Sherman (a pyrokinetic) and Roger (a large homunculus). Hellboy is America's first line of defense against occult menaces. Hellboy grew up to be a large, red-skinned demon with a tail, horns (which he filed off, leaving behind the signature circular stumps on his forehead), and an over-sized right hand made of stone.

Hellboy has faced werewolves, vampires, nuke-kubi, and other mythological creatures. Because of his destiny, he frequently clashes with figures such as Rasputin and Hecate, who wish for him to fulfill his fate. He is known for having a short temper and being a heavy cigar smoker.

After his first battle with Rasputin, Hellboy was perturbed of his destiny and returned to the ruined church where he first appeared in the world, and has a dream-vision of his origin: His mother Sarah Hughes (a witch), as a young woman, had cavorted with a demon, Azzael (Hellboy's father), and on Walpurgisnacht (a night of great significance to witches) conceived Hellboy as a result. Hellboy lay dormant within her until the demon returned at the end of the woman's life to claim her and his unborn son. Following this, he never (aside from Abe Sapien) told anyone about his vision.

Hellboy left the B.P.R.D over personal issues he had with the department's operation, brought to a head when he discovered Roger had been fitted with a small bomb during the Conqueror Worm affair. At first, he headed to Africa, but eventually, Hellboy wound up on a mysterious island, where he once again talked with Hecate, who told him to leave the island immediately. Not paying her any attention, Hellboy continued to wander the island, until he came across the ruins of a large building. He is then soon attacked by Urgo-Hem, one of the Ogdru Hem, and was impaled by the creature's leg, and apparently bled to death. A Spanish priest who had been killed on the island in 1525 re-created himself from Hellboy's blood. Aided by the magic bell given to him by the African shaman Mohlomi, Hellboy was able to return to life, and the newly re-created priest told him a brief history of the Secret History of the World - including the tale of the watcher angel Anum who was responsible in creating and imprisoning the Ogdru Jahad. The origins of Hellboy's Right Hand of Doom to be none other than Anum's that created and imprisoned the Ogdru Jahad, and was a sacred object in Hyperborea. Hellboy was then forced to fight the priest after he went mad from Hellboy's blood and transformed into a monster - which he claimed "was what Hellboy was meant to be", eventually killing him and Urgo-Hem.

He later left the island and was lost at sea for two years before reaching the west coast of England.

Hellboy then joins the Wild Hunt. The Wild Hunt's objective is to hunt down Giants that have begun to arise around England. Soon however the leaders of the hunt turn on Hellboy, revealing he was the team's real reason to hunt all along. Hellboy is knocked unconscious while Giants killed the members of the Hunt. Hellboy is kept invisible by the grace of a bird who was following the orders of its mistress. While trying to sneak past them, however, he decides to pick a fight with the giants after one smells him, and eventually goes berserk and kills the whole group of giants. He then meets a grown-up Alice Monaghan, the same baby girl who was kidnapped by faeries in 1959, who takes him to see Queen Mab. Mab, however, seemingly betrays them when they are attacked and Alice is poisoned. Three pigeons came to their rescue and they are also sent by their mysterious mistress who turns out to be the Arthurian witch Morgan le Fay. In order to see her (and save Alice), Hellboy has to defeat the demon guarding the bridge to her castle. Once done, she explains to Hellboy how his mother Sarah Hughes is in fact the descendant of Mordred, the son of King Arthur. She further explains that Hellboy is the first male descendant of Mordred and thus the rightful King of England, and that should he draw Excalibur, the Noble Dead of Britain would rise to fight by his side.

Hellboy wanders the castle and is eventually confronted by his own reflection, being told that he would eventually unleash those imprisoned in Hell and make a paradise on Earth for them. As Hellboy battles his reflection (which has grown increasingly more demonic) a blast of fire erupts from them that burns everything in the castle and causes Hellboy's horns to grow. He eventually finds Alice's room charred, with Alice herself reduced to bones. With some encouragement, Hellboy finally draws Excalibur, with many watching on, and suddenly appears in the fields where he met Queen Mab - Alice to is still alive, as if it was all a dream, although Hellboy still has Excalibur.

Half-Demon Physiology: Hellboy's superhuman abilities would seem to stem from his demonic heritage. While his specific powers and abilities have never been explicitly listed, Hellboy is much stronger and more physically durable than an ordinary human.

He also uses special ammunition that is made to be effective against most any supernatural entity. These bullets usually hold silver shavings, holy water, white oak, garlic, and bits of iron, making them dangerous to almost any creature Hellboy might come across. The film version of the character also carries an oversized pistol, known as the “Samaritan”, which Hellboy himself describes as using “Really big bullets.” These specially-prepared bullets are hollow and contain silver shavings, holy water, cloves, etc. to ensure the weapon's effectiveness against supernatural creatures. The gun was fashioned from melted-down church bells and fragments of the True Cross. It should be noted that although Hellboy is, by his own admission, a lousy shot; he prefers to “mix it up” in hand-to-hand combat whenever possible.