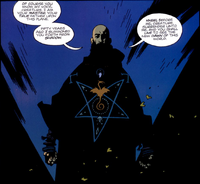 My work can be completed now even sooner than I had planned.

Grigori Yefimovich Rasputin was born in Pokrovskoe, Siberia on 1869. He was raised in the Russian Orthodox Church, and manifested healing powers and claimed to have experienced religious visions: most of which are of pagan imagery. When Rasputin was twenty, he left his home to find the meaning of his newfound powers. He spent three months in the monestary at Verkhoture; soon after he left, the Virgin Mary came to him in a lucid vision. While at Verkhoture, he also became associated with the Khlysty sect of the Eastern Orthodox Church.

In 1895, Rasputin witness a another vision which he thought was the second visitation of the Virgin Mary. However, it was the witch Baba Yaga, who foretold him that he was chosen as the "agent of change, father of a new millennium." The Baba Yaga appeared to Rasputin again five years later, this time in the flesh. Astonished of the witch and excited of her prophecy, Rasputin offered a portion of his soul to her to bury in the roots of Yggdrasil, the World Tree, for safekeeping. Rasputin at first thought that his prophetic action for a new millennium would come through politics, and so forth gain power and influence in the Russian court when he cured Prince Alexi's hemophilia. However, his dominance and popularity gained enemies. On December 16th, 1916 Prince Felix Yusopov and his conspirators assassinates Rasputin through poisoning, beatings, gunshot, and finally being thrown into the Neva river.

After being assassinated, Rasputin was revived and contacted by the Ogdru Jahad. They enlisted him as their mortal agent in the world. Soon after, Rasputin fled Russia and settle in as a hermit in the Italian town of Postignano. There he was contacted by the Nazis to begin development on an occult method for ending the Second World War on the Axis' favor and joined Heinrich Himmler's Nazi Occult Bureau, the Sonnenrad Society. From this, Project Ragna Rok was born. In the organization he earned the respect and friendship of Ilsa Haupstein, Karl Ruprecht Kroenen, and Leopold Kurtz; but, also gained the disdain of Herman von Klempt, which the two never come to agreed with each others' ideas. As the Nazis sought to use Rasputin to defeat the Allies, Rasputin knew this would never happen. He merely intended to use the Nazi’s resources as long as he could to achieve his own goals: to trigger the apocalypse which would jumpstart a new Eden.

Rasputin first appeared in a cradle the Beast of the Apocalypse for the Nazis during the closing end of December 1944. When the summoning accidentally placed the creature (Hellboy) in the hands of the Allies, Rasputin retreated to the Arctic Circle.

He returned in 1994 with Sadu-Hem, a monstrous spawn of the Ogdru Jahad, in tow. Rasputin's goal was to use Hellboy's stone right hand to free the Ogdru Jahad from their crystal prisons and permit them to raze the earth. However, Rasputin's plans were foiled by the timely intervention of Hellboy's associates from the Bureau for Paranormal Research and Defense, Liz Sherman and Abe Sapien. Rasputin was killed and Sadu-Hem was burned to death.[1] At the exact same time of Rasputin's death, the Ogdru Jahad chose another harbinger - the young West Virginian boy, Humbert T. Jones, otherwise known as the West Virginian Miracle Boy.[2]

In March 1996, Rasputin re-appeared as a ghost while his pawns attempted to restore the vampire Vladimir Giurescu to life. Rasputin approached billionaire, Roderick Zinco, asking him to serve as his agent. Zinco agreed, and bankrolled the new Ragna Rok Project underdeveloped by Kronen and Kurtz. Rasputin directed Ilsa Haupstein to abandon her efforts to revive Giurescu and instead place herself within an enchanted iron maiden. Haupstein did so, dying in the process, but her blood allowed the goddess Hecate to use the iron maiden as a permanent and indestructible body. Hecate's mortal form, like that of Rasputin himself, had been destroyed. Rasputin's plan fell furthermore, as Kronen and Kurtz's project came to a bloody end. Rasputin was angry to return to discover a revived von Klempt who was founded by Zinco and plotted to betray Rasputin. In retaliation, he blinded Zinco who he panicked and accidentally blew up the Norwegian castle and the Ragna Rok army.[3]

Rasputin retreated to the World Tree and to draw his strength from the half of his soul that the Baba Yaga had buried there. The witch approached him and tried to convince him to stay with her. However, Rasputin refuses and was intent on bringing Ragna Rok.

After leaving the World Tree, Rasputin (in an unexpected move) recruited Herman von Klempt's help to aid the Ogdru Jahad. He have him return to Hunte Castle and recalled Ernst Oeming's Nazi space capsule to Earth and bring forth the disembodied Ogdru Hem, the Conqueror Worm to transform mankind into a frog creature. When the creature was released, Rasputin, in his ghostly form, counsel to Inger von Klempt. He persuaded her that she was to be the first of a final race of men and to populate his new Eden. But she was executed by Lobster Johnson and the end of the world was averted with the destruction of the Conqueror Worm by Roger the Homunculus.

In the wake of the final defeat, Rasputin was approach by Hecate, who mocked him for his attempt to free the Ogdru Jahad without Hellboy's right hand. Rasputin still couldn't bear the thought that he was being used as a pawn of the Ogdru Jahad and attack Hecate in a rage, but it is unknown whether she destroyed him or Rasputin done this to himself. Rasputin's last remains of his fragmented soul was retrieved by the Baba Yaga and placed it in an acorn.

In a battle against Hellboy, who was trying to fight his way out of the Baba Yaga's world, the witch puts as much of her power as she can into her slave Koschei the Deathless to kill Hellboy. As she runs out of her own power, she attempts to use the spirit of Rasputin, (still in the acorn) to power Koschei. But her servant, Koku, throws the acorn away in a manner of keeping Rasputin's Soul at peace where the acorn fell into the roots of Yggdrasil, where Rasputin's soul was seemingly lost for good.[4]

Retrieved from "https://darkhorse.fandom.com/wiki/Grigori_Rasputin?oldid=15033"
Community content is available under CC-BY-SA unless otherwise noted.