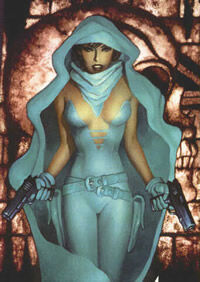 Elisa Cameron is dead. She has a sister, Margo, with whom she slowly reconciles and moves in with, as well as two recently sober parents, who are eventually murdered by a shadowy psionic that seems to know something about her past as a reporter, apparently slain over a story she was covering. Her natural weakness is jade, which keeps her from "ghosting" out and being able to pass through objects. She discovers she has the ability to teleport ("jump"), but must cross a sort of "Hell" to do so. Elisa faces a series of psionics, led by Dr. October, a woman who wanted to eliminate Elisa for being beautiful even in death. Elisa also must deal with a demon, Cameron Nemo, who escapes from her "hell", causing much destruction, before the aid of King Tiger helps her defeat the demon. Elisa also learns that her jumps, her Hell, even Nemo, are all a construct of her own imagination. Elisa begins a slow introduction to Peter, a man she sees visiting the graveyard. Elisa's teamup with Barb Wire, a bounty hunter from Steel Harbor, results in Elisa receiving a warning that Archibald Scythe, a psionic from her past, is coming for her. Margo falls under Scythe's spell while an all-female paranormal team, the Furies, combines with Elisa to take him down. Margo, driven by rage, summons up strange "shade-like" tears, which defeat Scythe but cost Margo her life.

Crux, the man responsible for the deaths of Elisa's parents, unleashes the shapeshifting Miasma on Elisa. This creates a panic in the underworld. On a personal note, Miasma, before being dispatched, seriously injures Peter, whom Elisa had begun caring about. Cameron Nemo escapes from Hell and takes over Scythe's body, always lurking around the corner for Elisa. Aided by X, King Tiger and Focus, the leader of the Furies, Elisa discovers a tape exists with evidence of her death. Elisa traces the tape to Crux, who is planning to invade a secret city beneath Arcadia and recover a key which will give him immense power. With the help of her three companions, Elisa aids the "Goblins" who live in the secret city and defeats Crux, who, just prior to his death, admits he has been behind everything from her parents' murders, to the psionic hunters and Elisa's own slaying. Elisa then assumes the mantle of the Sentinel of Arcadia.

Dr. October resurfaces, but is quickly defeated. Peter and Elisa begin to slowly move towards a relationship, while Elisa, aided by the Goblins, tries to protect the city. Elisa encounters Dr. Trouvaille, who experiments with the spirits of his victims and calls her "the failed one" hinting he knows secrets Crux didn't reveal. Margo, somehow alive and possessed by a being known as Silhouette, attempts to destroy Arcadia, but is saved by Elisa.

Elisa learns from the mysterious Concordia Leveche that she is not really dead. Instead, her "death" is linked to Scythe and Trouvaille, who have been running experiments through which souls are stripped from bodies, the souls "rendered" and then replaced with beings from another dimension. Trouvaille captures Elisa and shows her the tape. From the tape, she learns that she was a killer for Crux, that Trouvaille, aided by Scythe, tried ripping Elisa's soul from her body, but in the middle of the procedure, Cameron Nemo briefly appeared. Then, Elisa vanished. Silhouette is shown to be back in control of Margo's body while Margo's soul awaits rendering. Elisa escapes and fights Silhouette, who escapes, still in control of Margo's body. Elisa then kills Trouvaille. Elisa also has learned that Focus was in league with Trouvaille and soon discovers the same about Peter. She suggests Peter kill himself, while Focus informs Elisa that Elisa used to be one of the Furies. Soon, Elisa finds Cameron Scythe. Nemo, who reveals that as a part of Elisa's subconscious, he has always known her, is sent back to Elisa's hell. Margo, now a being like Elisa, appears and shoots Scythe through the skull, killing him.

Elisa, Concordia and Margo go to Hoyo Grande to ask King Tiger for help. Instead, they end up helping a very down and out Tiger regain his mojo and battle the shapeshifting "Szothstromael" clan. Elisa also has a revelatory encounter with the Man From the Vortex, who "reboots" her brain. This allows Elisa to recall that her real father, Dan Deerlane, was shot down by her adoptive father, in front of her eyes, when she was very young and that the pain of this deadened her to that of others, leading to her living the life of a Fury assassin. Silhouette returns, having used Trouvaille's technology to transfer more beings into the bodies of Scythe's remaining followers. Sent as ghost-hunters, they attack Elisa and her friends. Upon Failing, Trouvaille, whose body is dead yet whose essence now exists within his armor, joins them to take down Elisa and fulfill his experiments. They take Margo and Concordia, but Peter returns to aid Elisa in her battle. Margo's body is recovered, Silhouette is defeated and Trouvaille, along with the hunters, appear to be disposed of. Giving Peter a solid "get lost" Elisa leaves with her newly "re-alive" sister.