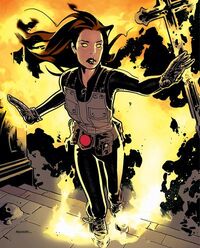 Red, white, whatever. Guys are all the same.

Liz Sherman is a pyrokenetic whose parents died when she set fire to the neighborhood. After that, she became a street thief for 10 years. Frustrated by living on the streets, Liz joined the bureau. Though she has left the bureau numerous times, she always returns because its the closest thing she has to a family.

Liz briefly tries to rid herself of her pyrokinesis by using it to jumpstart Roger the Homunculus, and falls into a coma as a result. Liz is taken to the Wauer Institute in Tirgoviste, Romania, until Roger later returns her powers to her after being plagued by guilt concerning the incident.

In order to learn how to better control her pyrokinesis, Liz lives with a society of monks in the Agartha Temple in the Ural Mountains. She returns to the B.P.R.D., and does her best to accept the changes that have been made to the team.

As a result of her time amongst the monks, Liz has complete control over fire: she can produce small hand-sized flames to light her way in darkness, and can erupt in a furious explosion of fire to destroy anything around her (the use of her powers on this scale seemingly require her to chant a mantra: "The fire is not my enemy, it is a part of me, it is mine"), and can also manipulate fire into shapes and designs. Her powers have become greatly magnified by a mysterious object. This dramatic increase in her already considerable powers allows her to burn the towering Katha Hem entity to dust.

Retrieved from "https://darkhorse.fandom.com/wiki/Elizabeth_Sherman?oldid=19699"
Community content is available under CC-BY-SA unless otherwise noted.