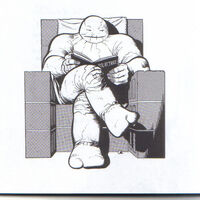 Ron Lithgow was a political speech writer for a U.S. Senator named Mark Douglas. On vacation camping in the mountains with a friend, Ron and his companion found a strange light near their camp site. When they got to the cave it turned out to be occupied by aliens, which caught Ron and his friend and transferred their brains unwillingly into rock-like super bodies. Other creatures, including a deer and a wolf, apparently had their brains transferred into similar bodies. The aliens ran numerous tests on Ron and his friend in their new bodies (mostly for strength and endurance). Frustrated with the seemingly endless testing, they one day managed to overpower one of the alien guards and took his weapon. Ron managed to escaped from the cave leaving his friend behind, who desperately wanted to get his human body back.

After escaping the cave, Ron contacted his friend and former boss Senator Mark Douglas. Senator Douglas called some of his friends at the National Sciences Agency to help Ron out. The NSA and CIA decided after endless testing at their labs, Ron could live his life with some conditions: he would be supervised by one of their doctors and he could not talk about the alien abduction. Ron Lithgow would no longer exist. His new persona was Concrete and his cover story is that he was the product of a government experiment to make a superhuman cyborg. Concrete began making the rounds on the talk show circuit as the media had a field day with Concrete-themed novelties.

As a boy, Ron Lithgow was something of a nerd: chubby, not interested in sports, and a voracious reader. Now as Concrete, he had the opportunity to do all the things he read about and wanted to do, much like his idol Richard Burton (not the actor). Regarded by many as "publicity stunts", Concrete has helped farm families, acted as an over-the-top musician's bodyguard, tried to swim the Atlantic Ocean, and attempted to scale Mount Everest. He supports himself by writing about his experiences.

Concrete's powers are amazing. His skin is a smooth grey rock-like structure, unlike Fantastic Four's The Thing. Sledgehammers and small caliber bullets do little more than crack the surface. A bazooka shell did manage to destroy his leg, which miraculously regenerated (although Concrete was unconscious throughout the regeneration). His eyes enable him to see things at approximately 10x magnification over great distances and even in total darkness. Despite his weight and immense body, he is capable of powerful leaps. He is capable of eating just about anything, from trees to rocks to books.

His powers are nearly similar to Marvel Comics The Thing. His concrete body gives him super strength, endurance,stamina and invulnerability.

His alien body has a number of abilities that he has doesn’t fully understand. He can eat almost any solid or liquid matter. Once when a cannon was shot at him and blow his legs off, he only had to eat enough matter to re-grow his legs back.

Concrete has been seen lifting objects hundreds and thousands of pounds in weight.

Concrete has no physical weakness, but has contemplated way in witch he might commit suicide.

Retrieved from "https://darkhorse.fandom.com/wiki/Concrete?oldid=19607"
Community content is available under CC-BY-SA unless otherwise noted.