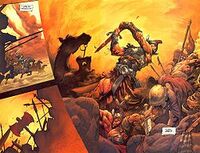 History of character has not yet been written..

Conan was physically one of the most powerful humans who ever lived; as demonstrated by overpowering and breaking the neck of a wild Cimmerian bull when he was only a teenager.

A wide variety of bladed weapons, though he usually preferred a two-handed Broadsword.

Retrieved from "https://darkhorse.fandom.com/wiki/Conan?oldid=17494"
Community content is available under CC-BY-SA unless otherwise noted.