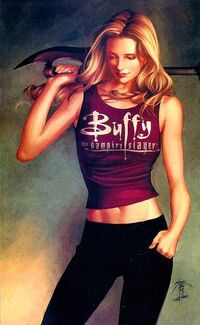 Most all Dark Horse Buffy-related comics prior to the on-going Season Eight series are considered non-canonical to the Buffyverse. For explanation and reason, see the "Notes".

At the age of fifteen, Buffy Summers started having violent dreams about women from different period of history slaying monsters. One day, she was approached by Merrick, a mysterious man who revealed her destiny as the Chosen One and became her first Watcher. Buffy initially did not get along with Merrick, who was sarcastic and intolerant of her valley girl nature, but the pair eventually gained a mutual fondness as he prepared her for battle against the vampire king Lothos. As Buffy's increasingly strange behaviour alienated from her peers, she befriended fellow social outcast Oliver Pike, relying on him for support after Merrick shot himself to protect her from Lothos. Despite little training, Buffy managed to defeat Lothos and his minions at her school dance, burning down the high school gym in the process, for which she was subsequently expelled.[1] Wanting to escape her problems at home, Buffy ran away to Las Vegas with Pike after being tipped off to the presence of vampires at the Golden Touch casino. Buffy got a job as a showgirl, and eventually she and Pike encountered the owners of the casino, Marcus and Mary Lou Sidle; the pair were siamese twins, Marcus being a vampire and Mary Lou not, and had turned the casino into a vampire nest. Buffy defeated the Sidle's by forcing a priest to bless the casino's sprinkler system, thus killing every vampire in the building. Afterwards, Pike broke up with Buffy, believing himself to be a burden that distracted her from her destiny as the Slayer.[2]

Buffy returned to Los Angeles alone, where she discovered that her younger sister Dawn had read her diary and informed her parents about the supernatural things Buffy had wrote in it. This, combined with their daughter's recent delinquent behaviour, convinced the Summers that Buffy could be losing her mind, and they had her committed to a mental institution. There, a psychiatrist named Dr. Primrose seemingly helped Buffy realise that her "delusions" about being the Slayer were actually fantasies she had invented to help her overcome the normal problems that teenagers face; vampires and demons were merely metaphors for growing up. Buffy accepted this, only to discover that the clinic was in fact home to the demon Rakagore, who, under the identity of "Dr. Stone", was using the clinic's patients to do his evil bidding. Buffy defeated Rakagore and learned that Dr. Primrose was a former Watcher. Primrose told Buffy that she had to accept herself as the Slayer if she was to survive the dangers of her calling.[3] After Buffy was discharged from the clinic, she and Dawn were forced to cope with their parent's divorce. When Buffy's secret admirer tried to alleviate her pain via magic, he accidentially unleashed the Malignancy Demons. Deceit, Guilt, and Abandonment targeted the shattered Summers family and exacerbated their emotions to near fatal levels; Buffy however managed to overcome each one, at the same time overcoming the pain of her parent's separation. Buffy, Dawn, and Joyce moved away from Los Angeles to 1630 Revello Drive in the small Californian town of Sunnydale. There, the final Malignancy Demon—Trepidation—was waiting for them. Buffy defeated Trepidation and looked forward to a new start in Sunnydale.[4]

Buffy enrolled at Sunnydale High where she met and became friends with Xander Harris, Willow Rosenberg, and her new Watcher, Rupert Giles. She also met her future love interest, the vampire-with-a-soul Angel, who had accidentially unleashed the Malignancy Demons. Together, they formed the "Scooby Gang", and battled the various supernatural threats to Sunnydale.

Following the destruction of Sunnydale, the Scooby Gang scattered around the world to locate and train newly-activated Slayers. When Xander once again fell under the thrall of Dracula and went to live with him as his manservant, Buffy was forced to break into the vampire's castle and convince Dracula to let Xander go.[5] Encompassing mystics and a wide technological armory,[6] the Scoobies expanded to keep on top of demonic threats on a more global level. Buffy funded this organization by going on a bank heist with other Slayers, which she reasoned was a "victimless crime" due to the bank's insurance.ref name=Anywhere"Anywhere but Here"</ref> For Buffy's protection, decoy Slayers were set up to divert enemy attention, one in Rome who was supposedly dating the Immortal, and the other underground. Buffy, Dawn, and Xander eventually set their base in a Scottish castle, with Buffy training a squad of new Slayers, including Satsu, Rowena, and Leah.ref name=LWH1 However, she failed to experience the feelings of connection that the other Slayers did, and Xander became concerned that Buffy was spending too much time alone.[7]

Over a year after Sunnydale's destruction, Buffy investigated signs of an attack from a new enemy known as Twilight and her team came under attack from the United States military, who had employed her old enemies Amy Madison and Warren Mears. Questioning General Voll as to his motive for attacking them, Buffy learned that the military now considered all Slayers to be a threat, should they start to think of themselves as above the law, as Buffy had done during her bank robberies.[8] While searching for information about upcoming dangers, Buffy discovered that Twilight planned to eradicate all magic from the Earth and that Buffy would suffer a betrayal; "The closest. The most unexpected."ref name=Anywhere In her first encounter with Twilight, she was warned that her decision to activate the Slayers had been a mistake, and she began to question her own actions.ref name=Sunset After realizing that Satsu was in love with her, Buffy had sex with the other Slayer, only to be discovered by her astonished friends.ref name=WatG1"Wolves at the Gate, Part One"</ref>

Slayer Enhancement: Buffy is a Slayer and has the normal powers that other slayers do, including:

Slayer Precognition: Buffy also seems to possesses an enhanced type of slayer precognition that warns her of impending danger through her dreams. For example, her dreams warned her of both her death by the hands of the Master and Angel's death; soon after, Angel lost his soul and reverted to Angelus, holding true to her vision. Later on in the series Buffy dreams of Faith, she talks to her and finds a way to defeat the Mayor through her vision.

Slayer Sense: Slayers possess a heightened awareness of their surroundings. This heightened awareness can, with experience, allow the Slayer to know the position of an attacker and fight them blindfolded or in the dark. This is not a constant ability, however. This skill must be honed through practice and the Slayer usually must focus to achieve the full benefit. A Slayer also has the limited ability to detect the presence of vampires. This power must be honed as with the heightened awareness, and the Slayer must focus to achieve the full effect. This does not prevent Buffy (and other Slayers) being ambushed by Vampires. Buffy is unusually deficient in this sense

Slayer Collective Memories: Like all Slayers, within Buffy's "dreamspace" are a collective of inherited slayer memories and prophecies. All Slayers through the ages share a psychic link, manifested in dreams. A Slayer will frequently dream of herself as a Slayer in another time and place. These dreams are usually vague, but can also be prophetic. Dreams exist in their own mystic plane or "dreamscape" where for a Slayer, precognitive sense and the inherited memories of other Slayers can manifest themselves. Also, Slayers have been shown to appear in each other's dreams, and Buffy and Faith shared a dream while Faith was in a coma.

Sleep-Induced Mystical Protection: In Season Eight, Xander comments that Buffy has some degree of mystical protection over her now, at least while she sleeps. To that end, her protection means even daggers split apart so as not to pierce her skin.

Mystical Link w/ Willow: Buffy's connection to Willow is now so strong, that even when unconscious, Willow's consciousness can (at will) channel an amount of her power through Buffy.

Despite her various abilities and talents as the Slayer, a running gag in the show is Buffy's notoriously bad driving skills. She repeatedly asks her mother if she can take lessons, to little avail. When she finally does get her hands on the wheel in "Band Candy", she doesn't know what the hand brake is for. In Season Four's "Something Blue", she admits that "cars and Buffy are unmixy things." In Season Seven's "Him" she is shown to still have possession of, and drive, her mother's SUV, though she is still characteristically terrible at driving and parking it.

While there had been an on-going comic series by Dark Horse prior to Season Eight, as well as a number of limited series, these comics are consider non-canocial. There are a few exceptions to this rule, as pointed out by Joss Whedon himself, and these include: Fray, Tales of the Slayers, & Tales of the Vampires (all Dark Horse mini-series). For more on what is and is not considered Buffy-canon, please see Buffyverse canon at Wikipedia.