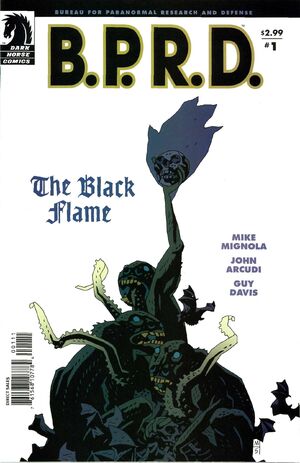 Appearing in the 1st Story

Synopsis for the 1st Story

Ben Daimio, Elizabeth Sherman, Roger and Johann Kraus along with a team of agents infiltrate a sewer full of frog monsters. After fighting their way to a lower level, they find a chamber full of large bloated frogs. Puncturing one, they learn the frogs are full of tadpoles. Liz decides to burn up the entire nest.

Some of the tadpoles slip through a grate into a lower level. A man in a Zinco containment suit picks up the tadpoles, puts them in a cooler full of water, and walks away.

Scott Allie later re-titled this story when it would be collected in B.P.R.D. Plague of Frogs - Volume 2, the first issue would become chapter one of War on Frogs, and the third issue of War on Frogs would become the epilogue for The Black Flame. This was to make for a better reading order.

Retrieved from "https://darkhorse.fandom.com/wiki/B.P.R.D.:_The_Black_Flame_Vol_1_1?oldid=20111"
Community content is available under CC-BY-SA unless otherwise noted.