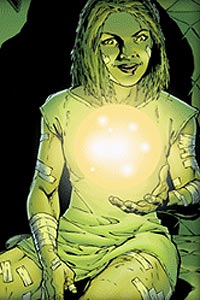 For extensive background prior to the Season Eight, please see either the Amy Madison Wikipedia entry or Amy Madison at the Buffyverse Wiki.

Amy is discovered by the United States Army during an expedition of Sunnydale; apparently, she had been living sixty feet under the Hellmouth after its collapse with her boyfriend, an unrevealed creature whom General Voll regards with disgust. Her first words to an exploratory member were, "I'm gonna help you kill her." In exchange for their cooperation, Amy requests unlimited access to all the government's magical hardware as well as a weapons lab for her boyfriend; and if they succeed in taking Buffy Summers down, Amy wants full immunity and release for the both of them.

Amy attacks Buffy at the Slayer base in Scotland, putting her under a mystical sleep which only a kiss of true love can undo. Raising an army of zombies to battle the Slayers, Amy battles Willow Rosenberg mid-air before being stepped-on by Buffy's sister, Dawn Summers. As Willow magically probes Amy's whereabouts, she suddenly senses a trap and is pulled through a portal. Amy presents Willow to her boyfriend, Warren Mears, at the military installation near Sunnydale. As Warren tortures Willow, Amy faces off against Satsu and an awakened Buffy, who manages to channel enough of Willow's magic to defeat Amy's magic. Having seen her dreamspace while asleep, Buffy takes the form of Amy's worst nightmare: her mother. Distracted, Amy fails to notice a grenade thrown at her feet by Satsu, and as Buffy and Satsu charge into the room containing Willow, they see Amy appear and teleport away with Warren in her arms.

Retrieved from "https://darkhorse.fandom.com/wiki/Amy_Madison?oldid=14884"
Community content is available under CC-BY-SA unless otherwise noted.